CES provides unmatched quality, service and value with the best warranties in the business. We strive to build long term relationships with all clients. 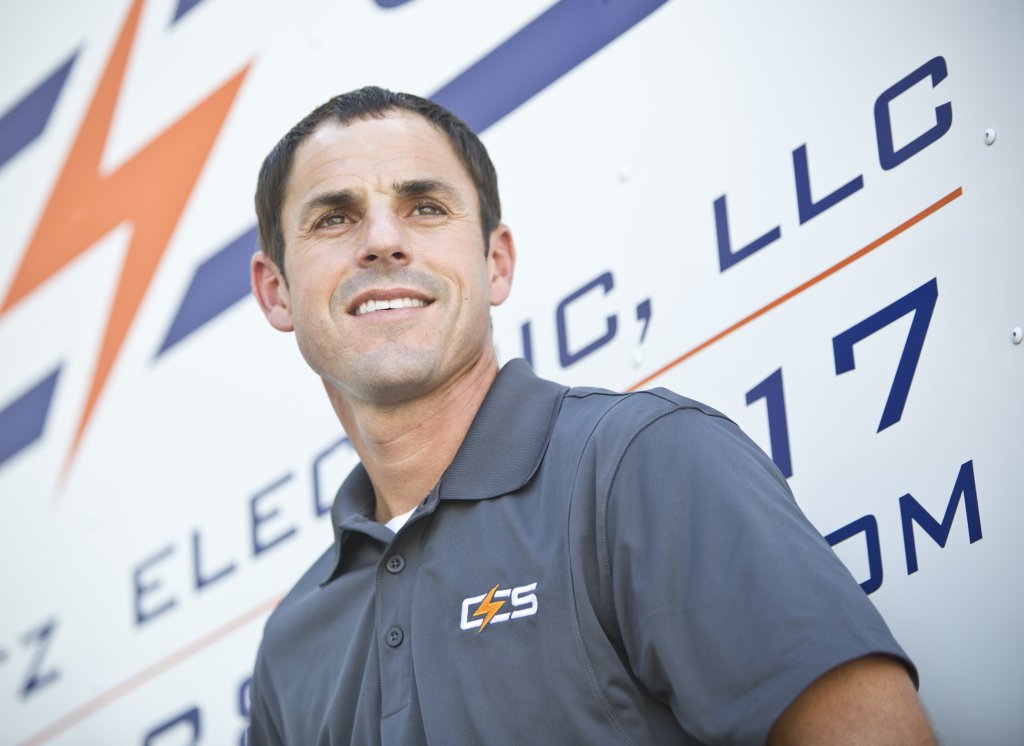 When do you move a side business front and center? For John Chustz, the decision had to do more with spirituality than with practicalities. At 29 Chustz had a 10-year career in electrical and instrumentation work, first at Gulf States and Entergy, then at DSM Copolymer. His wife, a nurse, was expecting their second child. “I had a good job,” he says. “People thought I was crazy for leaving the plant.” But he had seen older co-workers laid off after corporate shakeups and didn’t want that fate for himself. Instead, he chose independence through self-employment. For several years Chustz had been doing small electrical projects on his days off. Early in 2003 he dedicated  himself full-time to establishing Chustz Electrical Services. “Oh, it was taking a chance,” he says, adding, “I just went out on faith … determined to make it work.”

Within months, Chustz hired his first employee: 21-year-old Jake Richard, now CES operations manager. “It was just Jake and I with a truck, pulling a big trailer around seven days a week,” Chustz recalls. Jobs came steadily through referrals—and still do. He trained Richard in residential work first; after a couple years, Richard supervised that division, while Chustz began bidding on commercial jobs, where the company’s real growth potential lies. Today about 80% of CES projects are commercial, 20% high-end residential. Eventually, Richard joined Chustz in the commercial division, and the two “work hand-in-hand.” CES projects span the Interstate 10 corridor from Lafayette to New Orleans, with 90% in the Capital Region. A recent example is G. W. Carver Primary School in Gonzales. “Anything with wire in that school we performed,” Chustz says.

Chustz had a handicap in starting CES. “Just because you know electrical work doesn’t mean that you can run a business easily,” he says. By 2010, CES appeared prosperous, yet Chustz felt he “was just going in circles”: “We were making money but not knowing exactly where it was coming from.” At the urging of his cousin Darian Chustz —Gulf Coast president of Coca-Cola Bottling, who died in 2012—he retained a consultant. “It was the best business decision I ever made,” he says. After four intensive months the consultant handed Chustz five binders full of procedures customized for CES. Change has been the norm since then. Profitability has increased 7% through higher efficiency and productivity. Of the new cost-tracking system, Chustz says, “It’s the only way to run this kind of business; otherwise, you’re in the dark, hoping you estimated right.”

CES is poised for growth. In each of the last three years, revenue has been about $5 million as Chustz and Richard learned to run the business “as efficiently as possible without sacrificing quality.” “We have the resources in line right now to grow to $7 million or $8 million without adding any overhead,” the owner says. Currently, he’s in the process of selecting a location on which to build a larger office/warehouse in 2015. It will be near the present Port Allen headquarters, but will better accommodate the three separate divisions of CES—commercial, residential, and the burgeoning generator division—as well as company trucks and equipment. Meanwhile, Chustz says, learning continues at his “Christian-run” business: “Even a guy who just starts with us can teach us something. We’re always open to suggestions and change.”
By: Donna Perreault, Baton Rouge Business Report

Our company is dedicated to servicing your needs with the highest level of professionalism.  Our commitment to your satisfaction is the foundation from which a solid business relationship is built.  We understand the importance of establishing trust in a relationship, therefore, our company values a relationship built from trust.

Contact us today for your electrical needs!
Get Started
Pay Your Bill